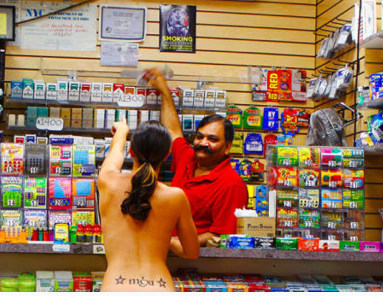 If there’s one foolproof way to get people’s attention in New York City (or anywhere, really), it’s going completely naked. French photographer Erica Simone is putting this tried and true method to the test to question how we interact with and use clothes today.

Simone photographed herself in the nude all around NYC, including the subway, an airplane, the library, and even outside the Ralph Lauren store. The photographer is compiling all the images for a book entitled Nue York: Self-Portraits of a Bare Urban Citizen, which she is currently trying to raise $10,000 for.

Simone explains the idea behind the project on her page. “New York City is a fashion mecca, where image and stature reign the streets,” she writes. “As I watch an image-absorbed society care more about the sales at Barney’s than the homeless people they ignore as they parade by, I began to ponder: “What would the world feel like naked? What if we didn’t have clothing to come in between us? Or if we couldn’t show off our social status? What if all we had were our bodies to express our personalities?”

Simone adds that the project is about “being comfortable with who you are as a person, with your body, your mind and your role in society.”