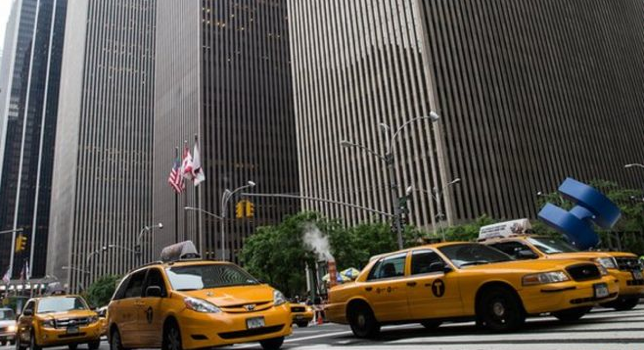 For the first time, there are more black Uber cars on the streets of New York City than traditional yellow taxis, figures have revealed.
The New York Taxi and Limousine Commission said there were 14,088 registered Uber cars compared with 13,587 yellow cabs.
However, the number of trips taken in yellow cabs far outpaces Uber rides.
That is because many Uber drivers work part-time, whereas taxis often operate all day.
Uber, which was introduced in 2011, claims that its UberX rides are often the same price – or cheaper – than the average yellow taxi ride.
But many users have complained about extra fees and so-called “surge pricing”, when Uber charges more for rides during busy periods like New Year’s Eve.
Furthermore, traditional taxi owners and operators have said that the company’s labour model – in which workers generally operate as at-will, freelance contractors – is not sustainable.
“Uber having an unlimited number of cars means no drivers – taxi or black car and livery – will earn a decent living,” said Bhairavi Desai, executive director of the New York Taxi Workers Alliance, an advocacy group for drivers of both Uber cars and yellow taxis.
Uber has been expanding rapidly across the globe, and recently announced plans to hire one million female drivers by 2020.
However, it has come under fire for both breaking local laws regarding transport, as well as for various safety issues with some of its drivers.