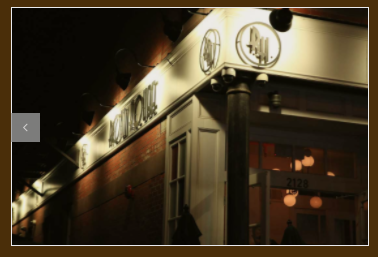 Opening a restaurant in NYC is a dream for many. Thousands of these dreamers turn their fantasies into bricks and mortar every year. And, statistically, it’s likely that hundreds of them will no longer be in business five years later. It’s a pretty sobering prospect that does not in any way daunt Cameron Fagan. When we first met her last fall, she was deep into the opening process of her new co-venture Row House, located on the corner of 115th Street and Frederick Douglass Boulevard.

“I’m an optimist. And I live in this neighborhood and I know where I would want to go and eat, so as long as I’m true to that, I think it’s going to be great,” Fagan said.

“Can you hear me OK, by the way?” Fagan asked. She was driving down the Saw Mill River Parkway on a mission to check out binders for the cocktail menus. “I’m on speaker. I know it’s a trek, and I could have had them send samples to me, but it’s more efficient to do things in person. Also, you would not believe the fall colors right now!”

Even then, back in October, Row House was well on its journey from idea to reality, gathering momentum through the tricky, touchy, nitpicky stages that make or break an opening. But it had been a long time coming.

“We got the lease two years ago,” Fagan said. “It was a grocery store that had been empty since the Seventies — only, technically, according to the department of buildings, it was two stores linked together. I was like, so what? But it took a good while to straighten that out. Then the renovation took a long time because, under forty years of decay, we uncovered amazing brickwork and old stone that we wanted to preserve. It’s been a passion project from start to finish.”

Fagan; her partner (and husband), Gareth Fagan; another couple, Sheri Wilson and Stephen Daily; and their friend Sameer Qureshi are the brains and the brawn behind the enterprise. “We’d been looking to open something new. We live here, we have other restaurants in the area, including Harlem Tavern, so we know the area really well, and we’d walked past this corner unit for years wondering what it would be like. It’s such a lovely building on a sun-filled corner. We knew it would be beautiful.”

A week later, the Row House sign went up, clean and sharp in black and white over the romantic French windows opening out onto the street. People passing by stopped to peer in at the stained wooden floor and the tables wrapped in plastic waiting to be set up in the generous space.

“It’s a brunch place, right?” a woman asked her friend as they walked past.

“Thank god,” replied the friend. “Brunch is my life.”

“Yes,” confirmed Fagan. “We are going to be doing brunch. But that’s not our focus. We’re a lunch and a dinner place too. We’re going to be focusing on seasonal American small plates. A little eclectic. Some Italian-inspired, some Asian-inspired. We have some entrees, but we’re thinking that larger groups might come and share a bunch of different things. Basically, when we think about restaurants, we just think about what we want to eat, how we are going out with our friends right now, what feels right. We hope other people will enjoy that too. There wasn’t anywhere in our neighborhood to do that.”

Then came one of the biggest make-or-break decisions for the restaurant — chef Andrew Welch would be in the kitchen. “We interviewed a lot of chefs, and then we found Andrew. He was running Tarallucci e Vino at the time, and he came and created a tasting for us that blew us away. Also, he used to live just a block away, and he was really happy to come back.”

A call went out on Twitter. “We’re HIRING! Bring your résumé to Row House.” Fagan was pleased with the progress. “We’re close to fully staffed now,” she said, “and a lot of our staff live within one or two blocks of here, which is great. They know our clientele better than anyone because they are our clientele. Now I’m really focusing on training. I’ve written scripts for different scenarios. We’re being very thorough.”

In late November things were heating up at Row House. “We’ve finally named our cellar bar. We had a long list, but some of us really liked names that other people hated, and a lot of the names were a bit weird. So we cut it down to a shortlist of four, then we had a drink together and picked. And now it’s called Under Bar, and it seems totally obvious that that should have been the name from the start.”

Logistically, there were no major road bumps. “The teaspoons were touch and go for a while, but they’re here now,” Fagan sighed.

As the first week flew by in a “bit of a blur,” it seemed that all the staff training (“a lot of it — everyone thought I was overdoing it, but I don’t think so”) seemed to pay off.

Bookings were looking healthy, and holiday parties started taking over the bar. “I’m almost out of printer ink,” said Fagan. “Can you hear it churning away in the background printing more menus?”

On Thursday night, the week before Christmas, the joint was jumping. The black-and-white wallpaper glimmered in the light from the string light sculpture, the stained-glass panels glowed, candles flickered on generous wooden tables. All around, groups of friends and romancing couples tucked into deviled eggs stained a festive purple with beet juice and filled with chicken liver mousse. There was a brisk trade in fried carbonara-filled dumplings, pigs-in-blankets with mustard, and creamy mini–chicken pot pies — well, technically, mini–chicken pot vols-au-vent.

Time will tell how Row House settles in to its community, but for now, one thing is certain — a successful opening has been achieved.

Oh, and by the way, those cocktail menu covers? Looking awesome.