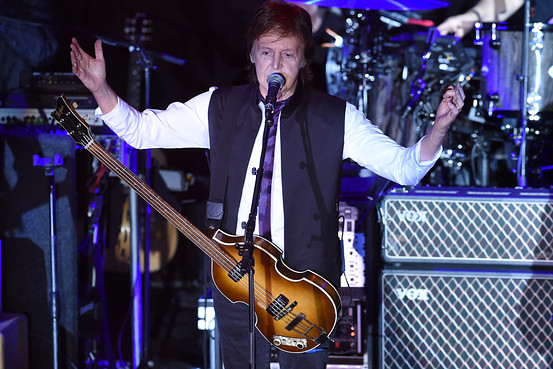 Paul McCartney surprised fans this weekend with a secret Valentine’s Day show at Irving Plaza — a tiny, 1000-person venue for an artist who, during his last visit to New York, filled the 18,000-capacity Barclays Center for two consecutive nights.

“This is a change for us. We play big stages,” McCartney said. “Here, we’re up close and personal. So close you can see my dental work.”

After opening with “Eight Days a Week,” McCartney raised his arms and said, “Happy Valentine’s Day. It’s all about love,” before launching into “Save Us.”

During the two-hour concert, McCartney — in town for Sunday night’s special “Saturday Night Live” 40th anniversary special — performed a number of Beatles hits, solo songs and even work by other artists.

“We’re gonna’ throw in a number of songs we don’t normally do. We do them in sound checks,” he told the crowd at the top of the show, as he introduced Carl Perkins’s “Matchbox.” He later played a cover of Buddy Holly’s “It’s So Easy.”

McCartney had announced the surprise Valentine’s Day concert on “The Tonight Show With Jimmy Fallon” and later on Twitter. Tickets sold out quickly at Irving Plaza, where they went for $40 each.

But some didn’t need to buy tickets. Sectioned off in a VIP area were guests such as Meryl Streep, Steve Martin, Lorne Michaels, Steve Buscemi, David Spade and Chris Rock – many of whom are set to perform with McCartney in the “SNL” 40th anniversary special. (Earlier Saturday, McCartney tweeted a photo from his “SNL 40” rehearsal.)
When the former Beatle played “My Valentine,” a  song written for his wife Nancy, who was also in attendance, red confetti petals strewed the main floor. “That’s the big spectacular production of this evening,” McCartney joked. “Hope you enjoyed it. It was quite expensive.”

And whenever he fingered the first chords to classics like “Let It Be,” “Hey Jude,” “We Can Work It Out,” “Obla Di Obla Da” and “All My Loving,” the crowd erupted into mass sing-along. (Many also pulled out their smartphones to film Sir Paul, including her ladyship Meryl Streep).
He also regaled with stories. Switching from piano to bass for “Jet,” he lamented the loss of his original bass guitar, and said the thief remains a mystery — but he can wager a guess.

“All I can think of is it’s someone in Germany. In an ancient schloss on a hill, some guy is in a secret room drinking schnapps. He’s got my bass,” he said.

The former Beatle seemed jubilant as he jammed on stage in the intimate venue, repeatedly thanking the crowd for being wonderful. As midnight came and went, the spotlight shone on the club’s disco ball, throwing glitter confetti on the walls and stage.

“Thanks for sticking around on this cold, winter night. It’s been really cool, a night to remember,” he said.

Let Me Roll It

We Can Work It Out

And I Love Her

Back in the USSR